A Senior Design project with our lab developing a sensor package for aerial river monitoring has recently concluded. The team, consisted of Ali Berjaoui, Mohamad Farhat, Mustapha Hammoud, Mohamad Hoteit. The following video highlights a test flight of their project (no river for now). 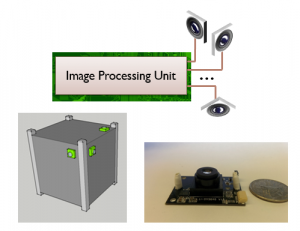 The wearable units consist of an STM32L series ARM Cortex-M3 controller, and a single-chip Inertial Measurement Unit (IMU), which contains a set of accelerometers, gyroscopes, and magnetic field sensors along three orthogonal axes.

ECE473 Embedded Systems Design for Winter 2015 has concluded recently. In the course, we work with ARM Cortex-M4F microcontrollers, mainly using the TI Tiva C Launchpad. The following are some of the final projects student teams have designed and implemented (in about 3.5 weeks).

We have received a small award to pursue Stereo Vision on board small unmanned aircraft (aka drones, quad-copters, multi-copters). Obstacle sense and avoid (SAA) on board aerial vehicles is a key technology that needs to be addressed in order to meet the FAA safety requirements for future integration of drones into the civil airspace. Visual approaches, such as stereo vision, can play an important role in meeting these requirements.

We will be working with the 3D Robotics X8 copter and a set of embedded cameras. Students interested in being involved, please contact me. 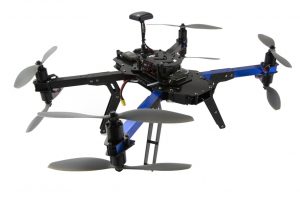 ECE473 Embedded Systems Design for Fall 2014 has concluded recently. In the course, we work with ARM Cortex-M4F microcontrollers, mainly using the TI Tiva C Launchpad. The following are some of the final projects student teams have designed and implemented (in about 3 weeks).

Motorcycle Tilt Meter and Warning System
Entails interfacing a 3-axis accelerometer to measure tilt, a circular LED array, and designing a wheel RPM sensor to measure motorcycle velocity. Software and modeling challenges include identifying the safe tilt angle as a function of velocity.

2048 Game
Implementing the popular 2048 game on the embedded hardware. Entails interfacing a graphics LCD display, a matrix keypad, and developing the game engine.

This was my PhD research topic on inferring satellite attitude changes from apparent motion of stars in an imager’s view. I identified the need for such a sensor and have been developing the technology since 2011. I developed camera hardware and image processing algorithms to estimate relative attitude between star field images in 3 degrees of freedom. “Stellar Gyroscope” was a technology demonstration payload on the KySat-2 CubeSat.

More information can be found in my Dissertation.

SNAP is a simulation environment based on MATLAB and Simulink for small satellite attitude control system analysis and design. It is based on my master’s research, I maintain it and continue to develop it. As of January 2013, it has had over 250 downloads by universities, industry, and NASA centers, and received positive feedback. The SNAP page contains more information.

I have also developed aerodynamic torque models (not released with SNAP), that I used to develop CubeSat concepts that are aerodynamically stable in the rarefied atmosphere in low earth orbit. Aerodynamic torques combined with magnetic hysteresis damping can provide passive attitude stability, aligning the spacecraft with the velocity vector (like a badminton shuttlecock). My paper titled “Aerodynamic Stability for CubeSats at ISS Orbit” contains the latest results. It’s freely available from the Journal of Small Satellites.

KySat-2 is the second generation CubeSat by the Kentucky Space Consortium. My PhD work on the stellar gyroscope was the main payload as a technology demonstration experiment. I was the science and payload lead, directing efforts on designing and integrating the camera and sensors on the system. I also advised on the satellite and mission design.

I have been involved in CubeSat EPS design activities at the SSL. With a graduate student colleague, we evaluated solar cell interface methods for CubeSats, including direct energy transfer and peak power tracking technologies. Independently, I have directed undergraduate and graduate student efforts to implement a complete CubeSat EPS with a distributed architecture utilizing point of load regulation, telemetry, and protection.

CubeLabs are miniature research modules on-board the International Space Station. The first two NanoRacks platforms (currently on the ISS) were developed by the Space Systems Laboratory. Most recently, we developed a CubeLab Bus, a generic platform to interface a science payload to the NanoRacks system.

The SPA architecture is a plug-and-play standard (similar to the automatic-discovery nature of USB devices on PCs) developed by the Airforce Research Lab for future rapid integration of satellites. At the SSL, adopted the SPA architecture for use on CubeLabs to support SPA devices on the ISS.

KySat-1 is Kentucky’s first satellite, a one-unit Orbital CubeSat. It was launched in March 2011 with the NASA Glory mission. The rocket failed to reach orbit due to a fairing separation failure. It was an ongoing project when I began graduate work at the University of Kentucky. I was involved in the integration, de-bugging, and testing efforts. I also designed the attitude stabilization system (drove development of SNAP, mentioned earlier).

SOCEM was a Sub-Orbital launch of a 2-Unit CubeSat on 27 March 2010, by NASA Wallops. ADAMASat is short for: Antenna Deployment and Mono-filament Actuator Satellite, it tested a deployment system used on KySat-1 in the space environment. I had an advisory role through the spacecraft and mission design phases, and the integration process. I lead the software development and testing efforts. Launch and satellite operation were a complete success.

High altitude balloon experiments were routinely launched by the Space Systems Laboratory during my Master’s and PhD work. I was team leader of Balloon-1 in June 2008, the helium balloon carried tracking hardware and a sensor suite to 98,000 ft. I lead hardware design and wrote flight software of the logging system. I supported several later launches in design reviews, payload development, and operations.

The process is nicely highlighted in this video of one of our high altitude balloon launches:

AviTrack was an extra-curricular project during my undergraduate work, to compete at the 2006 IEEE Computer Society International Design Competition (CSIDC). It earned at Honorable Mention Award as a top ten team out of 133 entries, at the finals in Washington, DC. AviTrack is a Migrating Bird Detection and Classification System, in collaboration with the Royal Society for the Conservation of Nature, in Jordan.